One great advantage of tactical backpacks and other gear based on military design specs is they tend to have tons of convenient pouches and ways to carry all your gear. From oversized interior spaces to extra attachment points, there is a place for everything. And if the basic layout of the backpack doesn’t fit exactly what you need, you can add all sorts of tactical accessories to fit your specific purposes. But how do all those extras stay securely attached? How do they keep from falling off?

From leather straps with brass buckles (circa 1776) to canvas straps used during World Wars I and II to the M-1956 Load-Carrying Equipment (LCE) setup used in Korea to the upgraded M-1965 Modernized Load-Carrying Equipment (MLCE)  from the Vietnam era, fasteners have changed over the years and entire systems have come and gone based on the needs of the day. But throughout, each system had two goals in mind:

1. Carry all the equipment a soldier will need in the field.

2. Make it manageable for soldiers to carry everything on their backs without hindering their ability to fight.

Early buckles and straps were limited in what they could carry and how. One particular drawback was the way items were typically attached by only one point, allowing them to dangle and swing when soldiers marched or ran. Not only did this constantly shifting weight cause back problems, it proved to be more than just inconvenient when tin cups and other metal items that hung on the outside of the pack clanked together, alerting the enemy to the soldier’s position, like sneaking around with a brass band.

Updated pack systems up through the Vietnam era solved some of those issues, but they had challenges of their own that prevented them from being the ideal solution.

The two most recent systems designed to accomplish these often contradictory tasks were All-Purpose Lightweight Individual Carrying Equipment (ALICE), which was used during much of the 1970s and 1980s before being phased out in the last 1990s, and the Modular Lightweight Load-carrying Equipment (MOLLE), the system currently used by all United States military branches. 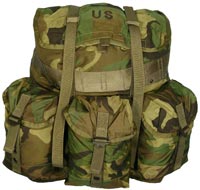 The ALICE system grew out of a series of changes in the MLCE system before gaining its own identity in the mid-1970s. Based on an upper-body harness design, the biggest innovation with ALICE was its ability to spread out the weight across a soldier’s shoulders, waist and hips, with multiple attachment points throughout the beltline and shoulder straps to fasten magazine pouches, canteens and other small but necessary items onto the straps. ALICE also allowed a soldier to separate his combat needs – weapon and mags – from his living needs, such as his tent, entrenching tool and rations. ALICE accessories are attached through a combination of snaps and straps. In all, ALICE and its evolutionary predecessors served the US military for over 20 years.

Invented in 1997 by the Natick Labs R&D division of the US Army, MOLLE panels consist of a horizontal webbing system – also called Pouch Attachment Ladder System (PALS) – that interweaves with the vertical strips on the back of accessories. The idea behind the weaving is to create a multi-point structure between the pack and the add-on so they work together to form a stable attachment between the two items so the accessories won’t move or fall off during use, including high-stress combat situations where a soldier may be running, jumping or rolling on the ground to take cover.

Older systems allowed attachments to bounce and swing as the soldier moved, weakening the binding to the point of damage or even failure, increasing the chances critical items such as spare magazines could fall off in the middle of an operation. MOLLE solved that problem with the requirement of at least two straps to be used for every accessory, ensuring a tighter connection.

MOLLE was officially adopted by the US military shortly after its invention but did not see widespread adoption until US troops deployed to Afghanistan and Iraq following the terror attacks on September 11, 2001. Current uses of MOLLE include the Army MOLLE packs and US Marine Corp ILBE packs, both designed by Propper.

Thanks to the overwhelming success with the military, it didn’t take long for the ultra-useful MOLLE system to find its way into the civilian world. Today you can find the MOLLE attachment system on backpacks and range bags, where a little customization goes a long way. Thanks to accessories such as tool pouches, dump pockets and binocular pouches, everyone can enjoy the convenience of having everything handy and reachable.