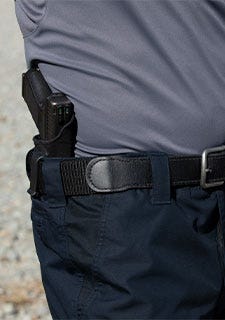 From the earliest days of the Wild West, nobody has devised a better way to carry a gun on the waist than in a holster attached to a tactical belt. Although materials and styles have changed over the years, the basic pairing remains.

In the civilian or off-duty carry world, there are basically two ways to carry a gun when wearing pants: outside the waistband (OWB) or inside the waistband (IWB). Yes, there is a third option – pocket carry – but that is reserved for very small guns only. If you want to carry anything bigger, onto the belt it goes.

Regardless of whether you carry IWB or OWB, there are critical considerations when choosing the right belt.

Guns – even small guns – are heavy. A full size, unloaded polymer-framed gun averages about a pound. Add bullets to it and it can top out close to two pounds. All-metal guns such as the classic 1911 can weigh even more. Throw on an extra mag in a mag pouch and we’re talking about a really heavy load to carry around all day. While two pounds might not sound heavy, it’s more than enough to weigh down the average leather or nylon belt to the point where not only does the belt sag, so do your pants.

While there are a few exotic materials for gun belts, most of them are made from leather, nylon, or both. But they can’t just be any leather. Most dress belts that you’ll find at your nearby retailer aren’t strong enough. The belt needs to be stiff enough to not lose its form throughout a full day of carrying. Dedicated gun belts are purpose-built to hold the extra weight and prevent the belt from twisting. Some of them are extra-thick while others contain a steel or polymer/Kydex insert between the leather layers for added stiffness. The biggest advantage of a leather gun belt for concealed carry is that it looks like a normal belt, so you won’t stand as the gun guy.

Nylon is another option, but make sure it’s thick enough. Casual nylon belts are usually not strong enough to support the weight. Over time and with excessive sweat, thin nylon will begin to loosen and lose its shape, causing the belt to sag. However, a good, thick nylon belt typically designed for tactical use will be strong enough to stand up to the strain. The drawback to a nylon belt is how it stands out in everyday life. It will fit right in on the range, but on the street it could look out of place, thus losing your tactical edge.

Some companies now make a hybrid option: leather buckle with a nylon belt that can be concealed under a cover garment. This is great if you want to maintain the low-profile look but keep the tactical features of a gun belt.

Gun belts serve a specific purpose and are asked to carry an extra load.

They need to be thicker than an off-the-shelf belt from the local clothing store. This extra thickness improves the load-bearing performance of the leather or nylon.

Most holsters have metal or plastic clips designed to go over and tuck under the belt to secure the holster in place and prevent it from popping out unexpectedly, especially when drawing the gun. Typically, the hooks at the bottom of the clips are ½” thick to accommodate a thick gun belt. Wearing a thinner belt might allow the holster to slide around on the belt – possibly out of reach – or come up and off the belt on a draw or if you accidentally bang into something like a table or chair, creating a very dangerous situation. A purpose-built gun belt will reduce the chances of this happening.

The buckle is the lynchpin of the entire belt. Scrimp on it and you’ll be sorry, as your gun drags your pants down like a gangster.

While no one buckle is clearly the best, each type has its ups and downs. Here are the four most common buckle types used in gun belts.

Whatever belt you choose, test it with your normal setup to be sure it will serve its purpose and keep your gun secure and in position.