It’s Not All About the Gun: Get Your Situational Awareness On

It’s Not All About the Gun: Get Your Situational Awareness On
Features

If you’re reading this post right now, chances are you’re a gun owner who’s spent significant time thinking about guns, talking about guns, buying guns, maybe even dreaming about guns. And why not? A firearm represents The Great Equalizer against threats of all sorts—whether it be a masked burglar or angry bear.

Of course, it’s better to avoid the burglary or the encounter with a giant furbearer altogether. And if you must engage, it’s better to see what’s coming your way than being blindsided. And so we turn to our friend, situational awareness.

What is situational awareness?

Most people associate it with making a visual check of one’s surroundings, and they’re right—frequent, relaxed visual scanning is one component of staying aware. True situational awareness is a multi-sensory experience, though. Other sensory inputs like smell, touch, and intuition (what a recent student called “spidey senses”) play a role in total awareness.

Listen to most any infantryman who spent time in the jungle hunting or evading Viet Cong, and he’ll say that after a few weeks, he and his compatriots could smell the enemy before they could see them. Most of us will never experience jungle warfare, but we can relate to having had the unsettling feeling that something wasn’t quite right at a particular place and time. Chances are you’ve indulged an urge to turn around and look while standing in line someplace, only to lock onto a stare that had been directed right at you. The wiring to sense our environment, especially its dangers, is in our DNA. It’s there for a reason.

Col. Jeff Cooper is credited with promulgating the color-coded system of awareness.

We can forgive the DHS in its infancy for thinking it was a good idea to use in airports. Remember those PA-system interruptions? Today’s color is ORANGE. Yeah, that was just dumb. But the color code system is a great point of reference for understanding and self-checking one’s own awareness—and readiness to avoid, escape, or fight and prevail in the face of danger.

“The one who anticipates the action wins. The one who does not, loses.” – Col. Jeff Cooper

Cooper preferred to categorize awareness using a four-color system. Some call it five colors if Code Black – at least recognized if not christened by the US Marine Corps – is considered. For purposes of this discussion, we’ll stick with the base of the scale: Codes White and Yellow. Orange, Red, and Black refer to threat recognition and ensuing events and will be addressed in a sequel.

A person so absorbed, perhaps in an electronic gadget or daydreaming, that they trip over a change in footing, walk smack into some object, or fail to notice an oncoming bus are all signs of so-called Condition White:  being unaware and unprepared.

It’s fairly obvious this is a bad idea when navigating public places or even wilderness terrain. About five percent of students in my concealed carry classes admit to embracing Condition White in the family home. Is the possibility of a sudden injury, fire, or armed robbery ruled out because one is at home? Certainly not. Thus, it’s reasonable to think that having at least some sensory energy devoted to scanning one’s environment, especially the aspects of the home that border outside environs, is worth doing, except during sleep when being tuned out is unavoidable.

Condition Yellow is a relaxed state of awareness and the most common form of situational awareness.

It’s simply taking in what’s available to the eyes, ears, nose, and if applicable, tactile and extra-sensory inputs, on a habitual basis.

Mr. Caracci put it well. Situational awareness, Condition Yellow especially, isn’t annoying, exhausting hypervigilance. If anything, it’s enriching to live “in yellow,” as it requires being mentally present in the moment. Most of the time, what’s noticeable in the present isn’t the boogey-man or boogey-situation, but a splendid display of life—people interacting, dogs playing, a street musician’s sweet tune, birds singing. Casual observation of such timeless scenes does a lot more than just provide the best chance to spot a threat early on…it can also reaffirm that life does go on despite the chaos or hardships that beset all of us now and then. Condition Yellow is good for safety and sanity!

The symptoms of situational awareness are easy to spot and to adopt. Shoulders back, head “on a swivel” to some extent, with a gaze that takes in what’s available to the eyes both near and far, on a regular basis. Situational awareness is noting the smell of natural gas or smoke where it doesn’t normally exist, and rather than ignoring it, moving into Condition Orange to report or investigate as appropriate. 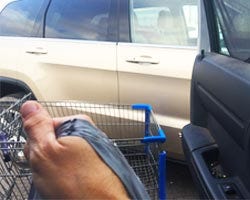 Perhaps the most common opportunity to exercise this is when putting groceries in the car. Turning one’s back to the parking lot and bending down to reach the inner recesses of the cab is bad medicine for safety. With just a little practice, it’s easy to form a protective triangle with an open door and a cart, and lift the bags in with your butt facing the open car. The temporary cart/door barricade provides an obstacle for a would-be attacker while the orientation of your head out to the parking allows for “supervision,” if you will, of the immediate surroundings.

Elect to sit facing a primary exit, back to the wall or as few people as possible, in restaurants, churches, or other large gatherings. Ideally, find a fire exit to sit near in case a hasty escape is necessary. Good physical positioning is useful not only for preventing crime victimization, it may also save your life in the event of an earthquake, fire, or other disaster.

People who “live in Yellow” can tell you where the emergency exits of a building are, if they’ve spent any time inside.

They know whether the doors and windows of their hotel or residence are locked, and if not, why. They may be the friendliest people, or not, but they’ll not fail to notice when the social climate in the room takes a turn, or when someone walks into the area who doesn’t fit in somehow. Situational awareness doesn’t mean being Gladys Kravitz-level nosy—but it should involve a periodic glance outside to the street if you’re indoors for extended hours.

Curious sociologists have been interviewing convicted serial killers and rapists since the ‘70s. From these interviews another advantage, perhaps the best one, of situational awareness is revealed—it’s a sort of repellant to would-be abductors of this type. Just like a cheetah cruising the savannah for dinner, those who prey on humans often go for the low-hanging fruit—the person who’s walking alone in an isolated area, the person who looks like she needs a friend, the person who smiles, laughs nervously, and fails to create distance when a friendly stranger gets too close and asks too many questions. Even if you really are having a terrible day, the predator scanning the shopping center for easy prey should see you as someone who’s aware and confident—there’s advantage in pretending to be a robust gazelle regardless of inward condition!

A great way to groom your own situational awareness is to do a conscious scan of your new surroundings every time your feet cross a threshold—whether it be into a new room of the home or office, from the car to the parking lot, or from the sidewalk into the store.

Many retail outlets offer the gift of plate glass, making it easy to see what’s going on inside before committing your body to that new space. Observe and decide in advance if the situation inside is something you want to be a part of. Be aware that any place with a cash register is likely, sooner or later, to be the target of an armed robbery. Decide in advance if you’ll step away to cover and call 911, or whether you’ll advance into that new space, and are willing to suffer the consequences if your life or livelihood is part of the fallout of the event. If you’re a civilian who’s inclined to attempt such heroics, you have a grave responsibility to be competent that your marksmanship and the ballistic equipment you carry won’t harm an innocent bystander. But that is a discussion for another day and another color code.

On the range, train your brain toward situational awareness by making a habit of visually identifying things — preferably people and movement — in your environment after every shot sequence. This requires turning your head away from the target area ahead, and visually surveying the periphery.

Don’t just turn your head out of habit, and don’t look at the ground or target—doing so is useless during or in the moments after a fire fight, when the “threat” — your target(s) — has been “neutralized.”

Identify whether folks around you are known or unknown, taking a mental note of what they appear to be doing if the environment permits. Some days, I have to be content with noticing something as mundane as a leaf being moved across the lot by the breeze. You, too, can be creative in making this practice work for your range environment.

Post-critical incident situational awareness currently carries undervalued or even ignored status in the world of self-defense, but this use of one organ, the eyes, to train another, the brain, to get back to the situation around the target might save your life.

There are too many news stories of armed civilians being shot by police because a planned or completed self-defense shooting was followed by stress-induced mental fog. The phenomenon of auditory exclusion—like not hearing sirens arrive on scene or clear orders to put hands up—can result in tragedy when a well-meaning citizen appears, to the eyes of to arriving officers, to have immediate murderous intent. Your method of wielding a gun during a situation that’s still hot when police arrive can make a difference too—another habitual practice to be addressed in a future article. Situational awareness is usually simple, but sometimes not.

Make a habit of situational awareness, or Condition Yellow in Cooper-ese. It’s a crime-preventing, life-enriching, and possibly life-saving routine. 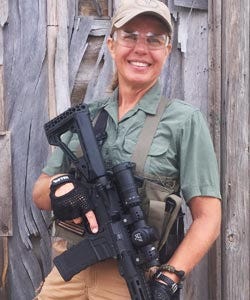 Eve Flanigan is a defensive shooting and concealed carry instructor living in the American Southwest. Today she works full time as an instructor and writer in the gun industry. Flanigan loves helping new and old shooters alike to develop the skills needed to keep themselves and their loved ones safe.
← Previous Next →
Related Posts