Chris Perdue: Riding for the Fallen

This spring, police officer Chris Perdue took a bicycle ride for those who can no longer ride for themselves: his fellow law enforcement officers who lost their lives serving the communities they loved. And he carried a message about preventing more deaths in the future.

The ride, sponsored by Law Enforcement United, raised money for the families of fallen LEOs and fulfilled the organization’s vision “To honor the service and sacrifice of all law enforcement officers who died in the line of duty and remember the survivors left behind.”

Perdue said it was the least he could do for his fallen brethren.

The way I see it,” said Perdue, who is a PO, FTO, and SWAT team member for the City of Fredericksburg (VA) Police Department, “the blood, sweat, and tears I give up for the 250 miles we have to ride in extreme heat and downpours is my way of giving back to the families who have lost a loved one in the line of duty.” 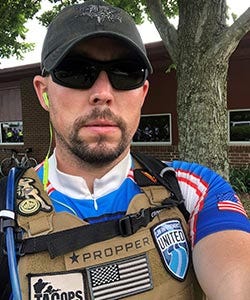 This year, over 400 LE personnel from local, states, and federal agencies from across the country rode the entire route wearing one accessory not normally found in a typical bicycle ride: body armor.

The secondary reason for the ride is to prevent future officer deaths by encouraging LE personnel to wear this critical lifesaving equipment. According to Perdue, “The idea behind wearing the armor on the ride is to support Project Active Armor, which encourages officers to stay safer by wearing armor on duty.”

As part of his riding gear for all 250 miles, Perdue wore a Propper Havoc ballistic carrier with Level IIIA soft armor on top of his jersey to raise awareness of the need for police officers to wear armor on patrol.

If we can go out there and ride hundreds of miles on a bicycle wearing armor or wear it when we run a race,” Perdue explained, “you can wear it for an 8-, 10-, 12-hour shift. The main reason for wearing a vest is to make sure you get home to your family.”

As for the Havoc itself, the fit and weight were “awesome” for Perdue. “I hardly even noticed it.”

The LEU ride is not the only awareness and fundraising event Perdue participates in each year. He is also involved in over half a dozen other rides and races around the Fredericksburg area throughout the year and will be wearing the Havoc vest in each one as part of his continuing effort to raise awareness of the need to wear body armor.