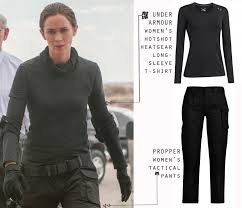 Have you ever been watching a movie or show and noticed that a character’s outfit bears a striking resemblance to an item currently occupying your closet or wardrobe? If it’s a Propper item, there’s a good chance it bears more than a resemblance. In fact, you may be surprised just how many times Propper clothing has been used in films over the last 20 years or so.

Propper has never negotiated a product placement of any kind in any popular media. On the contrary, costume designers seek out Propper garments as a way of lending an air of authenticity to the production and their portrayal of the military and law enforcement.

One of the more recent examples is Sicario, released in 2015. In the tense opening scene, Emily Blunt is sporting a pair of our popular Women's Tactical Pants during a raid.

As the largest supplier of U.S. military uniforms, it should come as no surprise that both Propper BDUs and ACUs have appeared in several films as well and worn by the likes of Bruce Willis and Aaron Eckhart. When depicting acts of military heroism on-screen, these actors and extras are often wearing the very same uniforms worn by those actually serving in the field. When realism is the goal, there’s no substitute for Propper. Here’s just a handful of films where you can see Propper’s military uniform in action: 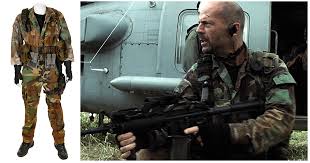 For decades, Propper has manufactured some of the most iconic apparel for the U.S. Military, and that steadfast commitment has led to frequent appearances under the bright lights of the big screen. When you wear Propper, with our legacy of equipping those who dedicate their lives to serving, you’re wearing something that’s genuinely been put to the test by someone on patrol or active duty. In addition to those actual heroes, we’ve also outfitted some cinematic heroes along the way as well.